I recently gave a lighthearted presentation at the Intel Visual Computing Architecture Review Board. These is a project I’d been coalescing in my head for the past 4 years or so.

What the heck is an industry advisory board?

Since my days at Microsoft I have participated in (and in a few cases, led) many gaming/graphics industry advisory boards.
These meetings last from 1-3 days and are typically hosted by industry leaders like Microsoft (DirectX or Xbox), Intel, etc.
The event is invite-only: a select group of industry leaders and visionaries are invited to participate. When putting together the invite list, the goal is always to create a “meeting of the minds” as opposed to “meeting of the companies”. A company may have disproportionate representation if they host many great thinkers with more to contribute. Participants include CTO’s/Tech Directors/Lead Engineers from companies like Valve, Epic, Crytek, EA, and so on.

The format is ‘directed discussion‘. The goal is to arrive at consensus around future directions for the industry as a whole: prioritization of problems to focus on, preferred algorithms/approaches/paradigms, etc.

In other words: What do game developers want to achieve in the 1-10 year time frame, and what is needed in terms of hardware, software, and tools to get us there?

The Pressure is On

For many of us, advisory board discussions are some of the most intriguing and informative conversations we participate in all year. You’ve got the brightest, busiest people in the industry sitting around a large table for a solid day at least.
Hence the pressure: The opportunity cost for the people in that room is immeasurable. Every minute wasted can be multiplied by 50-100 participants there – leaders upon whom around 40 top game companies depend to move their businesses forward.

So anything that can make the conversation more productive is a huge win.

Despite having the smartest people in the room, these discussions often tend to devolve into the same characteristic patterns. Sometimes it’s because questions are framed poorly. Sometimes it’s because as a group we have a tendency to fall into the same conversational ‘traps’. I, for one, am guilty of promulgating several of these in the meetings I ran.

My thought is that if we can classify these patterns and identify them as they occur, we can make our way back to productive and efficient conversation faster:
“Folks, I think this is a Dead Horse. Let’s move on!”

I call this project: Advisory Board Discussion Patterns. 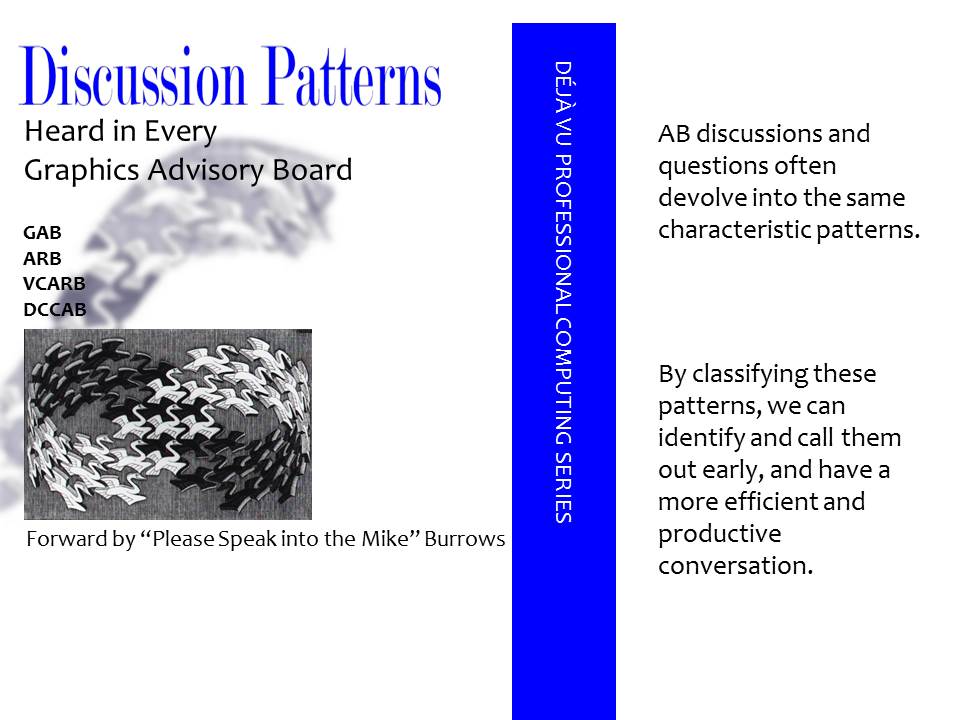 An homage to the Computer Science classic, Design Patterns. 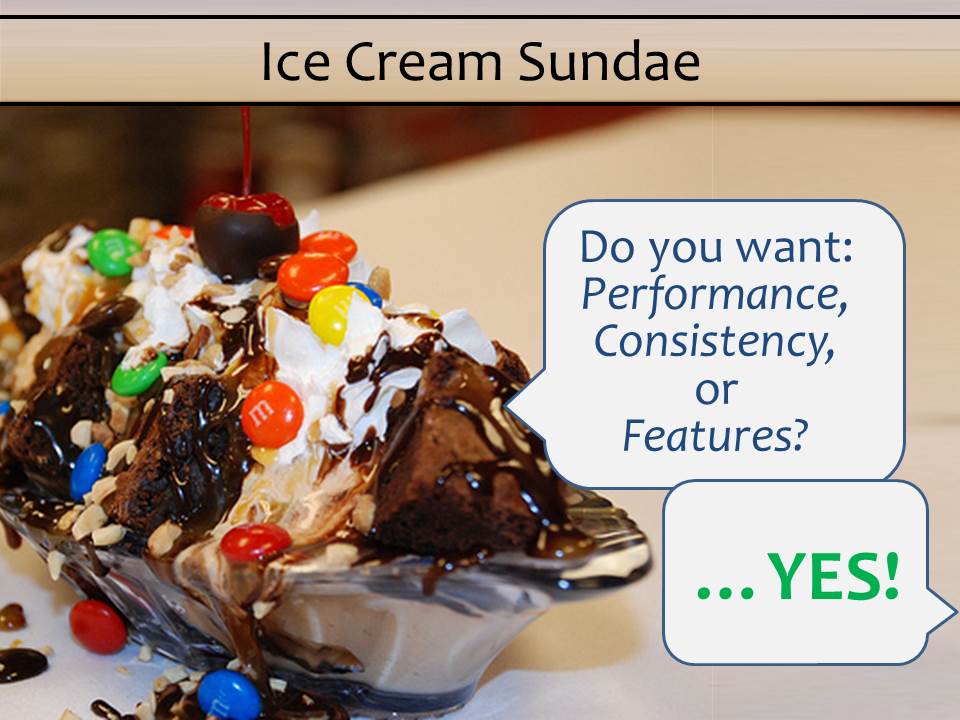 This one is usually the fault of the presenting host.
Often he or she will solicit feedback from the audience like this:
“Do you want Performance, Consistency, or Features?”
And we argue about what we want, until eventually someone will just say “Yes!!! We want it all!!”

If the audience can call this out when they see it, “Hey – I think this is an ice cream sundae!” – the presenter is forced to frame the conversation in terms of tangible tradeoffs. 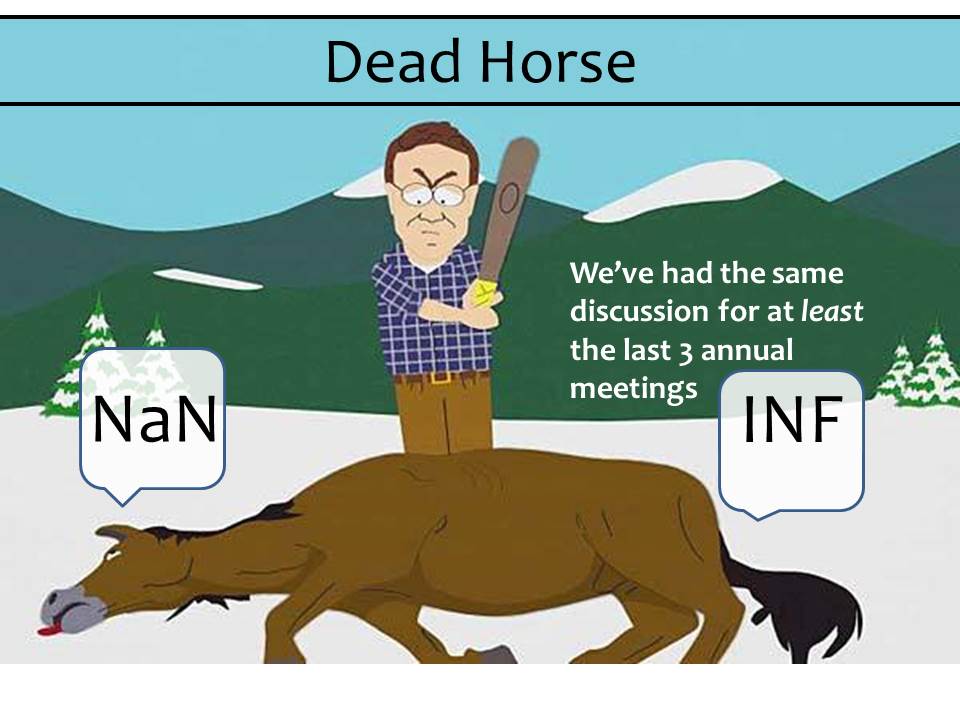 The argument around whether GPUs should support floating point specials — NAN and INF — like CPUs do lasted for years.

We’ve had the exact same discussion for the last 3 annual meetings.
No new information and nothing has changed – why are we trudging through the same argument?
Identify the pattern and say:
“Guys, I think this is a Dead Horse! Let’s move on.” 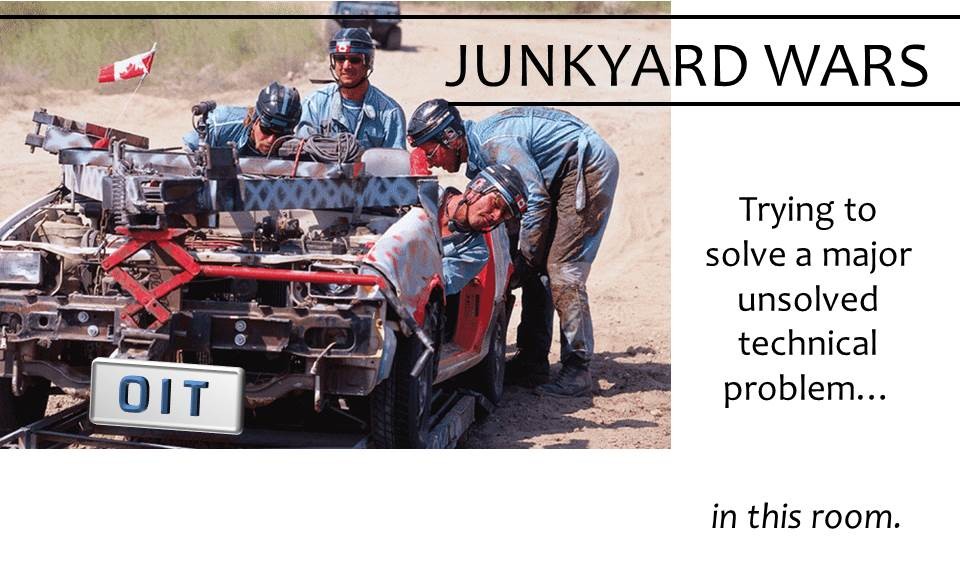 If you aren’t familiar with the show, click here.
Two teams of 4 hardcore mechanics and engineers are thrown into a junkyard, and in 12 hours they have to build a crazy new machine welded together from parts they scavenge in the junkyard. Like making a catapult that can throw a washing machine, or a hovercraft, or whatever.
Junkyard wars is when we try to solve a major unsolved technical problem in the meeting. Not discuss existing solutions but start devising radically new ones… Solutions to problems that researchers spend years working on.
When this happens, someone needs to step up and say “Hey guys – this isn’t Junkyard Wars. We aren’t going to solve this in this room” and move on. 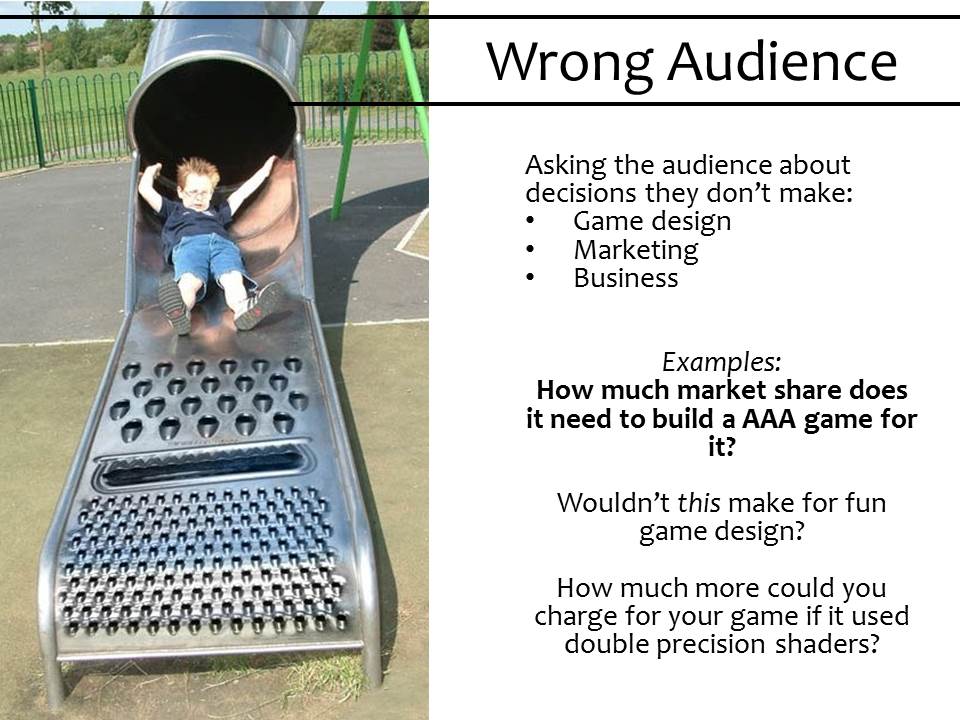 This is when the presenting host asks the audience about decisions they aren’t remotely responsible for.

Like asking engineers about how to do game design or marketing.
“Sorry – you’ve got the wrong audience, but maybe you should talk to our game designer, or our head of marketing?” 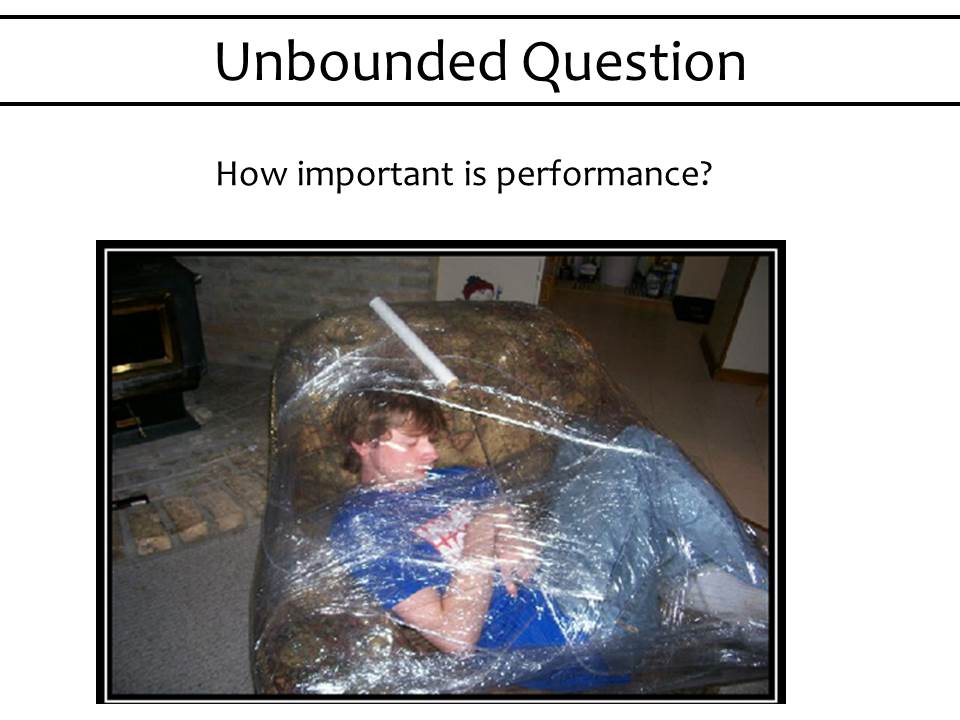 Force the person asking the question to bound it. 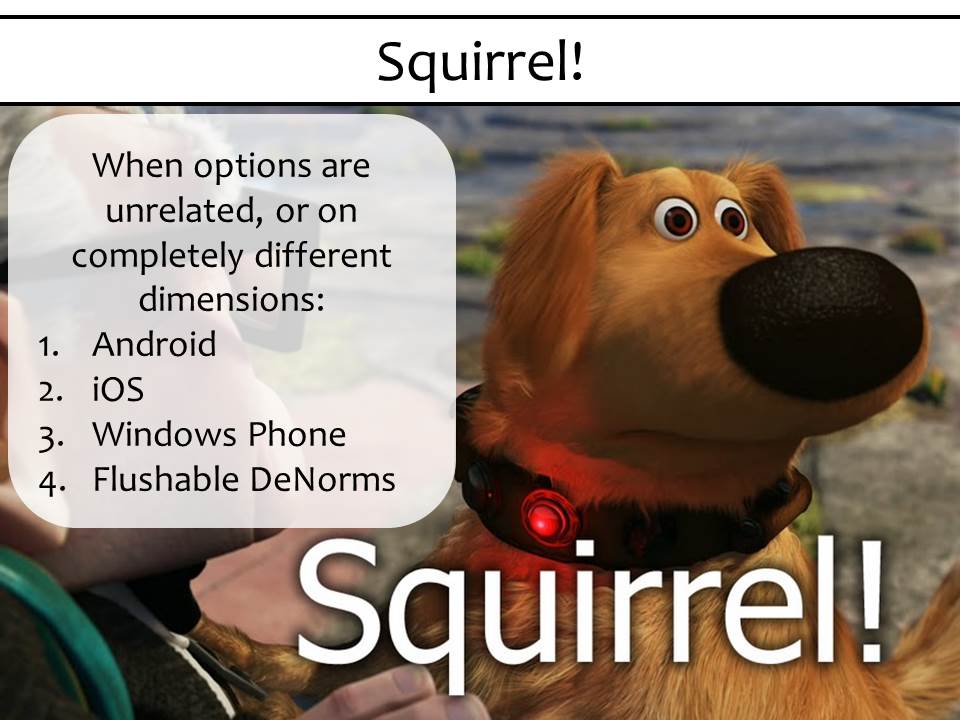 This is when the presenter asks the audience to choose one or more options – but the choices are on completely unrelated dimensions. Give the audience something they can actually compare.

In recent years, audience voting devices have been incorporated into these meetings with mixed results. The presenter can ask for a multiple-choice vote on a question, and the audience can see the result.
The problem is, like I said earlier, the advisory board is a meeting of the minds, not the companies. The goal is to get the smartest people in the room, not to establish a statistically relevant sampling of the industry. Which is why conclusions based on these ‘votes’ are meaningless at best and misleading at worst. 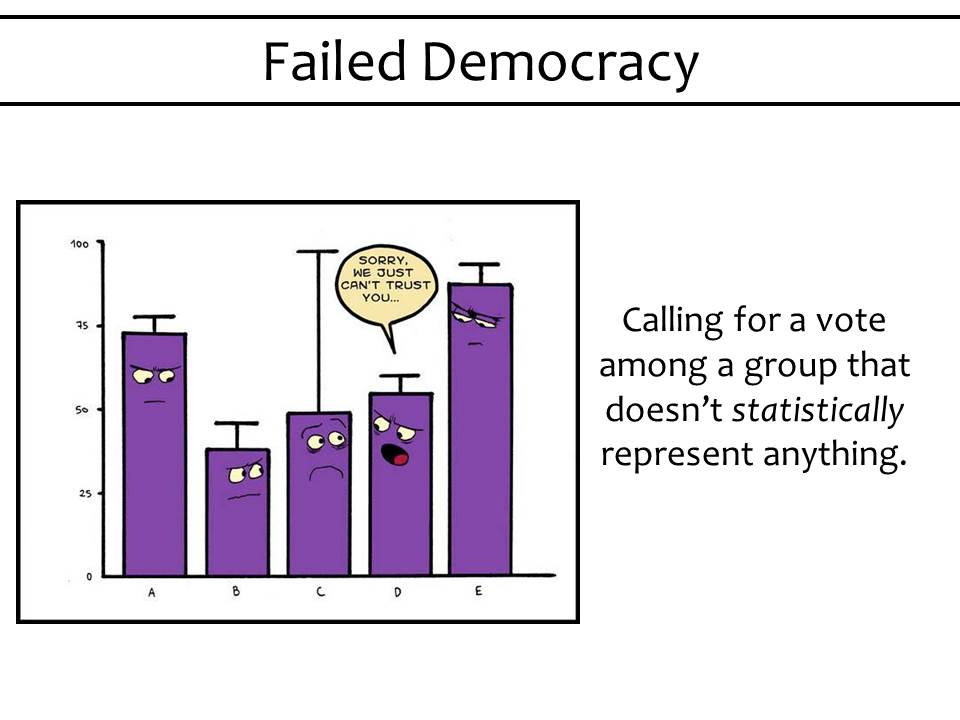 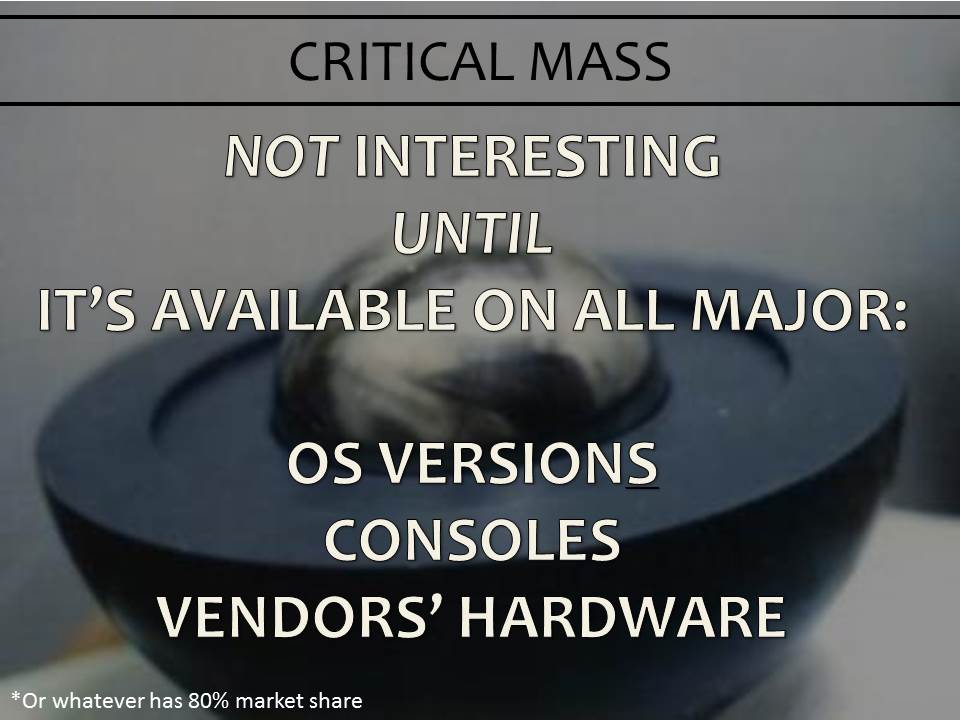 No one controls the entire hardware/software stack across the industry (thank goodness!). The challenge is that any feature we devise for the future isn’t necessarily going to be available on older platforms, competitors’ platforms, low-end platforms, consoles, etc.
Which makes taking advantage of new features an expensive and difficult proposition.
Most of the time, the discussion of what qualifies as critical mass arrives at the same conclusion. A conclusion that, if presented up-front, could save everyone a whole lot of arguing. 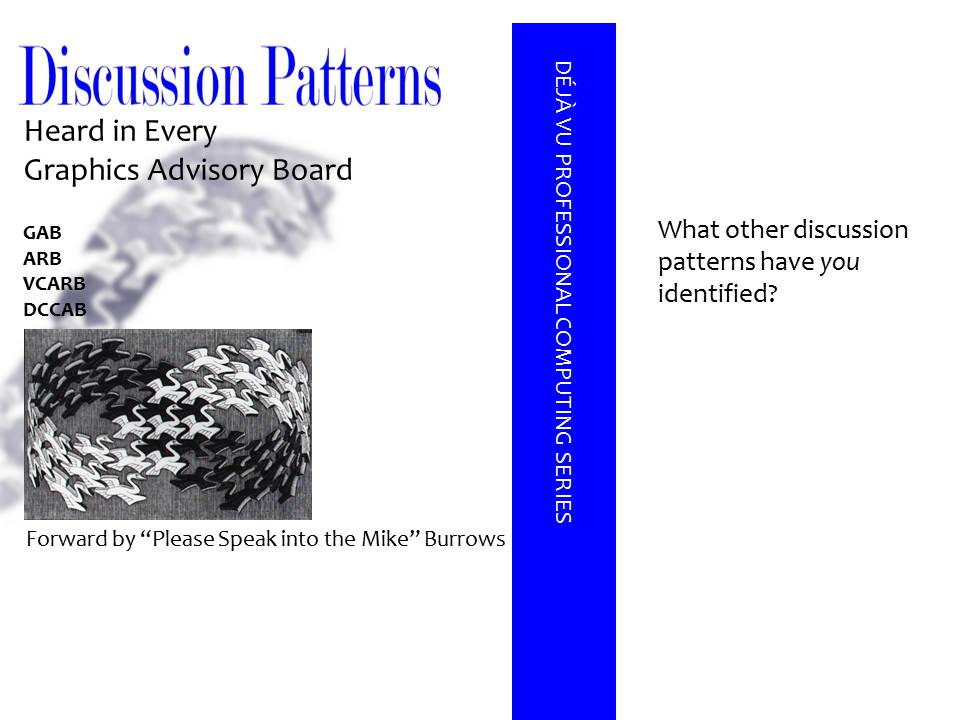 That’s the first batch. Have more Discussion Patterns you’ve identified in advisory board meetings? Share them in the comments!