The Sales Rep in the Dark Hallway - Sam Glassenberg

The Sales Rep in the Dark Hallway 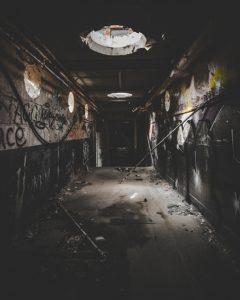 Note: Image for dramatic effect. Not the actual hallway.

Recently, I was in a local hospital doing playtests with some anesthesiologists, when someone suggested that I go downstairs to chat with a sales rep demonstrating a new endoscopic device. We are always looking for the most cutting-edge medical devices for our players to check out, so down the elevator I went.

Not to say that it was a dungeon down there, but imagine a dank hallway so narrow I couldn’t even take a photo for you to see what I’m talking about. The fluorescent lights flickered overhead.

A polished, nicely-dressed sales rep stood beside his rickety card table. It was covered with a bedsheet, folded as nicely as he could (although still obviously a bedsheet). On top of the bedsheet laid his “demo rig”—a medical mannequin, the endoscopic device, and an LCD screen.

The reason he had picked this location was clear—it’s right next to the exit of a staff lounge. He was hoping to capture some foot traffic on employees’ way to and from the lounge. On the other side of the hallway loomed an ugly freight elevator door.

I walked over and asked for a demo. The rep was elated. It didn’t matter that I wasn’t a medical professional (I had disclosed this up front)—he was just excited to be able to break the awkwardness of standing there in his “step right up, folks!” position. He stretched out the demo as long as he could, and about 5 minutes in, I understood why.

The medical sales landscape has changed quite a bit in the past decade. Medical industry sales reps now only get access to doctors 50-64% of the time. That number used to be something like 80%.

And it’s not for lack of useful products. I don’t want to get too specific about this rep’s device in the interest of protecting the innocent, but let’s just say it prevents a major mistake that medical professionals often make that results in a patient’s lungs unknowingly filling with fluid.

Here was this nicely dressed, enthusiastic man, ready to show the merits of his device, but he couldn’t capture the attention of a single nurse or doctor that passed him by—because every single one of them was focused completely on their phones. Texting. Reading. Playing. I observed this for 10 minutes during, before, and after my demo. No one stopped to look.

I hear this type of story time and time again when talking to companies trying to reach doctors. Nothing could make the case more succinctly for why medical device companies choose to promote through Level Ex games: the eyeballs are on mobile.

The Pig in the Box